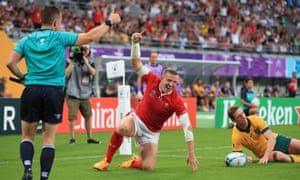 WOW. The Rugby World Cup is well and truly alive!

Wales set out to keep the scoreboard ticking over whether it were to be from a drop kick, penalty or dotting down over the white line.
You couldn’t fault Wales in the first 15 minutes as they mounted the pressure on the Wallabies, but the men in Gold kept in touch with the Welsh with overlap and cross kick to veteran Adam Ashley Cooper to score in the corner.

Yes, there was controversy during the match from the TMO, calling back a strong carry from Kerevi, resulting in 3 points and another 7 straight from the kick off from Welsh halfback Gareth Davies with another controversial intercept who looked offside at first glance, but that’s rugby. Some calls go against you and sometimes the bounce of the ball goes your way.

Credit to the Welsh men, their game management for 55 minutes of the match was far superior to the Wallabies in comparison and they did deserve the win.
The Wallabies also looked like a different team in the 2nd half, and when they held onto the ball and built phases they looked as though they were going take the lead.

The Wallabies will feel hard done by, but they do have themselves to blame with some questionable plays and selections.
The energy that White and To’omua brought from the bench really sparked the team, as opposed to the starting pair of Genia and Foley that looked to be really delayed with their delivery.

The 2nd man release ball is a common theme of all teams in this tournament, but the problem that many teams have (and the Wallabies suffered from) was by the time the first receiver released behind the pack to the pivot behind, Wales had already come up fast off the line to put the pressure on, James O’Connor at the best of times would have a man already in his face when he got his hands on the ball.

What the Wallabies need to do is get a man on the inside shoulder of that carrier (e.g. O’Connor), so he’s got an option of a quick tip inside – whether it’s the inside winger or a loose forward.
Poor O’Connor did his best with the delayed ball he was receiving.

The bright side for the Wallabies is that they can still improve from that performance, they’re still a chance in this tournament and will will still make it through to the next round.

The Welsh will go into the next 3 games with their tails up (deservedly) and with the confidence knowing that they can close out those tight matches.