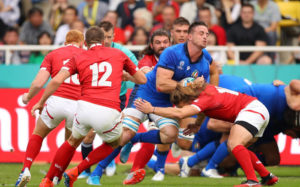 Italy played the first 10 minutes of the game like a team that was a class above, Italian Head Coach Conor O’Shea mentioned before they game that they needed to start well, be physical and but nail their roles, and they did just that.

Canada looked like a deer in the headlights, and made Italy look like a brand new Ferrari cruising the streets.

At the 17 minute mark Canada had the best chance of scoring with an open line bomb a certain try right in front of the sticks, and to be fair it wasn’t so much Heatons fault dropping the ball but number 8 Tyler Ardron just holding onto the ball too long.

You just felt Canada had missed their chance with all the momentum but no points to show for it.

For the rest of the match it was the Canadians game for the taking, with all of the possession but no runs on the board, a break would lead to a penalty, a drop ball or wayward pass.
Italy on the other hand took their opportunities and kept building and making Canada pay.

Italy looked like a different side then the team that took on Georgia, Braam Steyn at number 8 was the player of the match for me. A smart number 8 and very mobile, he should be starting vs South Africa and the All Blacks if they want to be a chance.

The real question for Canada, what have you been doing the last 20 or so years?
I know the 7s game has taken precedence over 15s rugby in the country (well it seems from afar), but the game looks stale.
There were some standout players for Canada, like Matt Heaton, Dth Van Der Merwe who always looked like a threat, but it doesn’t look like it’s getting better in Canada anytime soon. But hey, I could be wrong we can put it down to first game nerves, so lets see how they go in game 2. 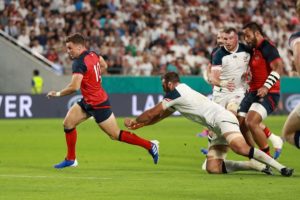 There was lots of noise coming from the USA camp and in the back of your mind you were thinking the impossible…. could the USA claim the second upset of the Cup?
Is the “sleeping giant” finally awake?
Will we see the fruits of the MLR (Major League Rugby) start to ripen and blossom?

In general play USA could match England and were able to make their first up tackles and put pressure on defence, then England realised line out drives and set piece was where they needed to wear down the Eagles pack – and it worked!

England with the direction of Willi Heinz and 9 and the class of George Ford, ensured the English Rose kept their nerve and stayed on track during this RWC.

Not all is lost for USA rugby, they looked like a much better outfit than in previous years on the big stage, it likely needs another 4 solid years for the MLR to continue to grow and get the next generation of university graduates to come through and familiarise themselves with professional rugby life, but hopefully it is a sign of things to come.
At the moment they are very structured which is great, but at this level you’re not going to beat the big boys with that itself, you need the X-Factor players who are a constant threat across the park.

England are tracking nicely and will be happy with that result after almost a totally new team to the team that played against Tonga a few days ago.