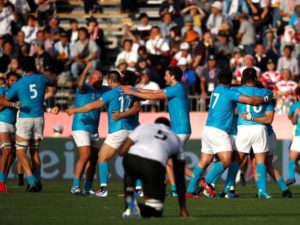 If you put Uruguay to win in your TAB multi you’re a very happy person right now.

Uruguay were persistent on disrupting the Fijians on defence, with the Fijians being so casual throughout the first half it made it easy for Uruguay to get up off the line and gang tackle the big Fijian ball runners.

ACCURACY was what was missing from the Fijians today, when they were in the clear the ball carrier would either:
a) Hold onto the ball for too long and missed the opportunity
b) A pass would go behind the support player
or c) Just get the timing wrong and either get bundled into touch or run away from their support player

This wasn’t the team that took it to the Wallabies just days earlier.
The day though belongs to Uruguay, they took their opportunities, they turned their passion into points and deserved the win.

John McKee summed it up perfectly, “credit to Uruguay the way they played this afternoon and the attitude that they brought to the game….. (for us) we were off the pace of the game”

From the body language of the Fijians, they cruised throughout the match and always thought they could comeback to win – unfortunately for them, it’s only an 80 minute match and time just ran out for them.
John McKee hit the nail on the head when he said that the attitude between the two teams was the difference, Uruguay played like a team that had nothing to lose, and Fiji were just too casual. It was summed up when kicker, Josh Matavesi missed two “simple” conversions and was smiling about it….. as a player and a coach, that sort of attitude and reaction would have you fuming.

What happens now?
Fiji have all but guaranteed their exit from the RWC after just 4 days, whereas Uruguay may have another win in them against Georgia who they no doubt  already targeting that match.