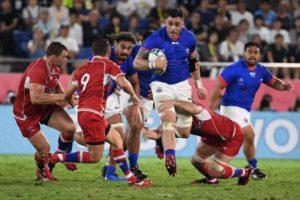 The Russians started the match much like they did agains the Cherry Blossoms on opening night, they almost shocked the Samoans by scoring first (almost), and kept in touch with the Samoans with the boot.

Yes the Samoans were reduced to 13 men with some dubious tackles, but they kept calm and let loose in the 2nd stanza.

The bench of Manu Samoa were effectively the difference in the game, they brought the energy needed at the top level and when the Russians started to fade, the replacements stepped up.
Alapati Leiua was an on-going threat the entire match.

Manu Samoa are a chance vs the Scottish and confirm their spot in the next stage of the tournament but they must hold onto the pill and dictate the game unlike how they let Russia do so during the 1st half.
Manu Samoas standout was Kane Lea’upepe. The man is having a massive season, going from being in the wider squad for 3 different Super teams (Chiefs, Crusaders and Hurricanes), to locking  in a 2 year contract with the Hurricanes and looking like a THE player to watch for the Samoans.

I’m liking the potential I’m seeing from Russia as this RWC progresses, for a so called “minnow team” to have a 4 day turn around and push the Samoans to start getting their act together is a massive effort.

I’ll say it now, USA is no longer the “sleeping giant” of rugby, it’s the Russians…. Keep it up Russia !