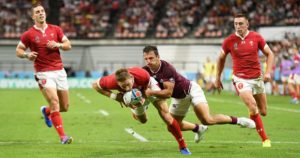 Out of all the games in the last few days I was actually expecting Georgia to put up a solid fight against the Welsh, who throughout the match just look cool, calm and collected shooting to a 22-0 lead midway through the first half.

Wales didn’t seem to be phased at all by the Georgians, they cruised throughout the match even with the Georgians coming back stronger in the 2nd half.

It’s going to be hard for Georgia to win a game outside of the Uruguay match with some a big pack, realistically they’re playing 3 number 8s on the loose with Tkhilaishvili (at 6), Gorgadze (at 8) and the legend Gorgodze (at 7)
All big strong men but not quick enough to the breakdown for the likes of Wales and will struggle against Hooper and the Wallabies, and the dynamic Fijian loose trio.

The Georgians skill-set is second to none though, they show glimpses that they can play, but like Argentina rugby many moons ago, they have to be more than a dominant scrummaging side, there needs to be some creativity against the big teams – and hold onto the pill !

Wales will get better as this tournament progresses, Gatland is quietly confident and you can tell they were holding back, making sure they didn’t suffer any injuries throughout the game.
I have a feeling Wales will show their a “big game” team as we go deeper into the RWC.
Georgia down, bring on the next contender….

On another note
Is it just me or has anyone else noticed that teams are well offside trying to “line-speed” but not being called by the match officials?