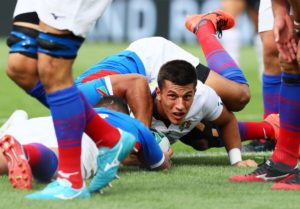 If you wanted to show a friend who’s never followed rugby before a game to get them excited and highlight what the sport is all about, this is probably not the game you want to take them to.

It was always going to be a difficult game to get excited about but there were glimpses of brilliance in an error ridden match.

One thing I noticed is that every time a mistake was made by Italy, they would look at one another puzzled, and ask why the other did what they did, whether it was a pass that went to ground, or giving a penalty away or any error made.

Italy won the game comfortably after an early challenge from Namibia.

Where are we at with Italian rugby? There seems to be little to no progress over the last decade, and exposure to the Six Nations championship.
How can this team improve before the next RWC, let alone start attracting some serious attention in their own nation so they can get some solid development and progress.

For Namibia, it’s a great achievement reaching the RWC for a nation like them, but it’s going to be a long tournament for the team with the All Blacks and South Africa waiting in the wings. 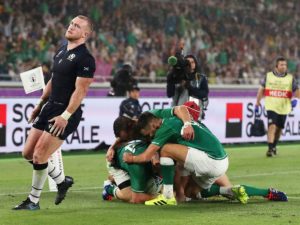 You could hear the atmosphere through the TV screen right from kick off, you could see the passion in all the players eyes in both sides during the national anthems.

It was all Ireland in the first 15 minutes of the match. Yes, there’s a bit of controversy whether Ireland truly are the “number 1” side in the world through the rankings, but their dominance and execution showed why this is one of their best ever chances for their first ever RWC title.

Scotland were a one man gang with Stuart Hogg cleaning up at the back and excellent kicking into space.
At the 30 minute mark it was 19-3 to Ireland but Scotland had the higher possession rating, go figure, the Scots couldn’t turn that into points.

The second half didn’t help either team as it turned into the inside of a slushy machine with the rain coming down, and the games standards skills & started dropping.

It turned into a kicking dual, with the Irish getting the better of the Scots dotting down on the 56th minute, Conor Murray putting an up and under which was cleaned up by the Irish fullback who then sent winger Conway into the corner.

Ireland were always going to be a class above Scotland, it’s like the game you play when you know you’re more dominant than your opposition and the most challenging part is to try your best not to sink down to their level.
At time Ireland showed their dominance, but at the same time they did at times seem like they were in the twilight zone and trying to run the clock down.
The big win for Ireland is that they’ve come through the game unscathed with no injuries.

The Scots, well…. there’s just no creativity on attack.
I counted 6 times during the match when they gave the back door pass which ended in Stuart Hogg catching and pummelled by an Irish defender.  It’s as if the only attacking game plan was to get the ball to Hogg and hope for the best, in saying that, Hogg was an absolute soldier who constantly tried to spark his team.
Will Scotland get better? I hope so, but at the moment they look like a team that has been running team runs at training where it all looks good, until an opposition is put in front of you, then there’s trouble. 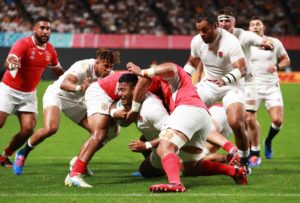 Tonga didn’t have the best build up with a 90 odd point hiding vs the All Blacks so in the first 10 minutes they controlled the game well when they had the ball, and England were shaking off the rust.

England had some great opportunities on the back of lethal weapon Elliot Daly who was fantastic under the high ball and running the ball back with some spice.
Tonga kept the pressure on the entire first half even with the English stretching out to a 15-3 lead at halftime.

England were still in 2nd gear in the first half and the game was being played at a comfortable pace that the Tongans could handle and kept the English within striking distance.

If you try compare Englands result vs Tonga to the All Blacks a few weeks ago and think “Nah England is no chance” then you’re comparing apples with oranges.
England were shaking off the nerves and cobwebs throughout the game, there was some obvious frustration a times when Owen Farrell would have a go at teammates, officials and at times himself, but thats just hi competitive nature.

England will keep building from here and I think we all want to see the “best” teams such as England, Ireland, Wales, the Springboks, the Wallabies and the All Blacks go at it come finals time. Until then, you’ll see teams drop their standards now and then, but the big teams will rise for the big occasions.

Tonga have the potential to scalp a big victim in this pool of death, if they bring the physicality against the French then we could see a repeat of 2011. Argentina have had their players (for the Jaguares) in the South African Conference for  the last 3 years and won’t be phased by big bruising encounters like what they’ll face from Ikale Tahi, but what is certain is that the Tongans have learnt a hell of a lot from playing the All Blacks a few weeks ago on how to take control of their own ball and securing possession in the breakdown.