Lessons learnt off the field in Buenos Aires #TOKITALKS

“Rugby fans on that side of the world aren’t bringing him down, they aren’t calling him names, they’re not criticising his nature, they celebrate Sonnys attitude towards those less fortunate, they praise Sonnys generosity to help others, they idolise the man that gives his time to give.” 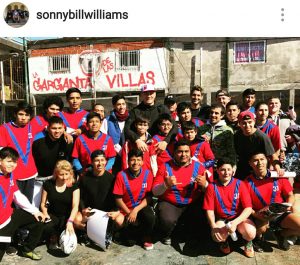 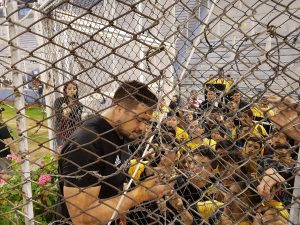 Last week I travelled to Argentina, Buenos Aires for meetings with clubs and coaches we will be working with for rugby clinics and tours over the next 12 to 18 months.

I was lucky enough in brief visit to get down to the Los Pumas vs All Blacks match on Saturday too, what an awesome experience it was to see the passionate Argentinian supporters get behind their team and witness their respect for the
All Blacks. 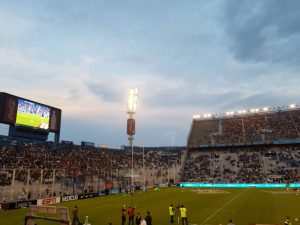 After the match Juan Toconas pictured with me below asked if I was Samoan (I had to get it translated from Spanish), he said he was from Villa 31 Hockey Rugby Club in Buenos Aires, it is one of the poorest areas in the city.
All Black, Sonny Bill Williams, went to visit his club during the week and gifted him and a friend tickets to the game, he had been sitting in his seat the entire match. 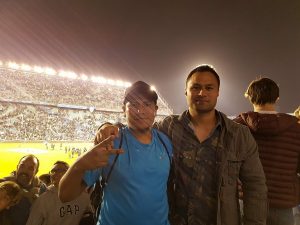 Juan was so grateful to have had the opportunity to see the game with his All Blacks cap (also gifted to him by SBW), he was buzzing. He held Sonny in the highest regard and said he loved New Zealanders (and Samoans) for their kindness and he’d previously heard even before meeting Sonny that the New Zealanders were the most generous people in world, always caring for others, with the All Blacks being the main ambassadors & symbolism of that good nature.

Throughout my meetings with rugby clubs, it was echoed throughout Argentinian rugby circles that they had a huge level of respect for New Zealand.

One official I met with from Hindhu Rugby Club, one of the most successful clubs in Buenos Aires had mentioned on his recent trip to New Zealand this year his tour group had met the great Sir Michael Jones, and he was astounded that Michael Jones made time to meet with them – they were in awe to be in the presence of a living rugby legend.

Rugby jounros and coaches couldn’t speak highly enough about the All Blacks, and having them play against their beloved Pumas was an honour in itself. They did believe that they had a chance to beat the All Blacks but it would have to be the “perfect match” to beat the worlds best.

I had the chance to meet former Los Pumas halfback, Fabio Gomez, who played during the 80s and played most of his career in Italy, he had said in Spanish, “New Zealanders are so respectful and nice.”

Pictured at the top of the blog is a shot of Kane Hames who with SBW were the only 2 players to stay behind after the game to shake hands with fans and kids who travelled from across Argentina and South America to be at the game and have their dreams fulfilled to watch the All Blacks.
Santiago (Chile), Mendoza, Catamarca, Corodoba, Rosario and Punta del Este (Uruguay) fans from all over these regions are only a few I saw pack the 50,000 seats in the stadium.

For me, it was a massive buzz to hear all of this great feedback about my beloved country, and hear rugby fans and non-rugby fans who’d heard about the All Blacks that they held our national team in such high regard.
It did get me thinking however, do we in New Zealand take our All Blacks for granted?
Do we respect one another in New Zealand as much people overseas believe we do?

I started thinking about THAT GAME this year, 2nd Test of the ABs vs LIONS series, SBW and the red card…. the reaction afterwards…. the media reaction….. the comments from everyone across social media…..
Now don’t get me wrong, everyone is entitled to their own opinion on matters and this blog isn’t about that incident, or what you think about players in the All Blacks.

I do want to highlight that right now in this point of time we have something so special and to be proud of right now, and that is our All Blacks and people like Sonny Bill Williams who ambassadors of the team.
With Sonny, we have a person that is having an effect on the world of rugby that we haven’t seen since Jonah Lomu burst onto the scene. Rugby fans on that side of the world aren’t bringing him down, they aren’t calling him names, they’re not criticising his nature, they celebrate Sonnys attitude towards those less fortunate, they praise Sonnys generosity to help others, they idolise the man that gives his time to give.

For a rugby fan like me and a proud kiwi I truly believe that as a nation need to have a good hard look at the humans wearing that black jersey, not just on the field. They put their bodies on the line week in, week out, and are changing peoples lives all over the world.

To the All Blacks, keep up the great work. I sure am proud to have you as ambassadors of Aotearoa.